The Best Waterfowl Hunting Spots in the U.S. | Agescan International

The Best Waterfowl Hunting Spots in the U.S.

Home Hunting The Best Waterfowl Hunting Spots in the U.S.

For American hunting enthusiasts, where to hunt is as important a question as when and how often. Last year, our sporting experts provided a list of the best fishing spots in the U.S. and this year, we’ve put together a list of the best spots in the U.S. to bag waterfowl, as well as insights on the best equipment and ammo to bring, along with key links to government agencies so that you can start your hunt as informed as possible. So, without further ado, here is Agescan International’s list of America’s best waterfowl spots.

At peak times of year, the Central Valley of California hosts 5 to 7 million waterfowl, which accounts for more than 60% of the Pacific flyway’s total geese and ducks. This high ratio results in some of the best waterfowl hunting in America. If you want the absolute best in hunting, private duck clubs in places like The Grasslands and Butte Sink offer incredible experiences and some of the finest vistas California has to offer. But there is also incredible public hunting available on many national wildlife refuges as well is state wildlife areas.

You can expect to find green-winged teals, mallards, wigeon, pintails, and several breeds of geese in large numbers. For information about licenses and regulations, contact the California Department of Fish and Game.

While the stretches of grassland make for fine rifle shooting, the shotgun will be the preferred method to hunt the plentiful waterfowl in the area. While steel ammunition is definitely the more affordable option, the most discerning sportsmen are turning to tungsten ammunition when tracking waterfowl thanks to its generous payload and incredible density.

When it comes to hunting, penetration energy plays a key role in hitting the target, and tungsten alloy is unparalleled as a material. Tungsten is one of the densest metals in the world, with 19.3g/cc compared to steel at 7.87 g/cc and lead at 11.3 g/cc. Tungsten Super Shot is a hard metal alloy product made of 95% Tungsten powder, 5% Nickle and Iron powder to reach a density as high as 18-18.3 g/cc, which is 60% denser than traditional lead shot. This will be your best option for waterfowl hunting.

At the other end of the country, you’ll find Chesapeake Bay, known as the cradle of American waterfowling. This area has a robust hunting heritage that dates back to Captain John Smith, who was hunting in the region in the early 1600s. Chesapeake Bay is among the Atlantic flyway’s most important migration areas, making the Eastern shore of Maryland and its surrounding locales the perfect location for waterfowl hunting. The bay offers a number of wildlife management areas and national wildlife refuges, which keeps the population of mallards, green-winged teal, black ducks, and canvasbacks high.

If you are interested in hunting along the Eastern seaboard and Chesapeake Bay in particular, contact the Maryland Department of Natural Resources or the Virginia Department of Game and Inland Fisheries to learn more.

In order to maintain the natural beauty of the bay, authorities and enthusiasts will both tell you the same thing: do not bring lead ammunition. Soon to be banned federally, lead ammo is incredibly toxic — both to the game and the wetlands you’re hunting in. Preserve the land’s natural beauty and pack environmentally-friendly tungsten super shot — ammunition that guarantees velocity thanks to its superior density. 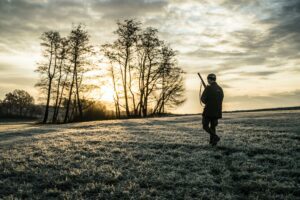 Puddle Ducks in the Prairie Potholes

Known affectionately as America’s duck factory, the Prairie potholes stretch across Montana, North and South Dakota, Minnesota, and Iowa in the U.S. as well as Alberta, Saskatchewan, and Manitoba in Canada. This area produces the bulk of North America’s puddle ducks, and the area’s kettle lakes, also known as potholes, provide the perfect upland ecosystems for ducks to mate.

While hunters in the field can enjoy fast action, good scouting is imperative. With such dense habitat, ducks can be found pretty much anywhere. Enthusiasts should look to hunt in the morning, spending their afternoons glassing in order to ensure that the next day is a productive one. If you plan on hunting on the water, make sure not to set up on the roost or you might risk chasing all of the ducks out of the area for days. Instead, look for small ponds that the waterfowl loaf on, and stake your claim there.

Apart from packing proper ammunition, such as tungsten super shot, be sure you have all the scouting equipment you’ll need for distance sporting. When choosing binoculars, be sure to find a brand made with extra-low dispersion glass. And when you choose camo, be sure to pack all season all terrain gear — so that you can make the most of waterfowl sporting year-round.

Few people are aware that the U.S. Army’s engineers built a series of dams and locks on the upper Mississippi in the 1930s. This created a massive network of marshland, islands, and shallow open water areas bordering on Wisconsin, Iowa, and Minnesota. These wetlands are home to a number of waterfowl species year-round, and overflow with even more during migration times.

At peak season, the upper Mississippi houses more than 50% of North America’s canvasbacks. Meanwhile, thousands of swans, geese, and ducks gather at the upper Mississippi River National wildlife and Fish refuge, making for perfect sporting any time of year. Public hunting is permitted across a great deal of this 240,000-acre area, and many sporting enthusiasts enjoy success on the islands and along the shoreline.

Remember to pack tungsten ammunition, especially if you intend to island hop. Tungsten super shot is far denser than steel and will travel farther at the same velocity. Also, tungsten shot is non-toxic, ensuring that spent rounds don’t contaminate the land — ensuring abundant sport for future generations of enthusiasts.